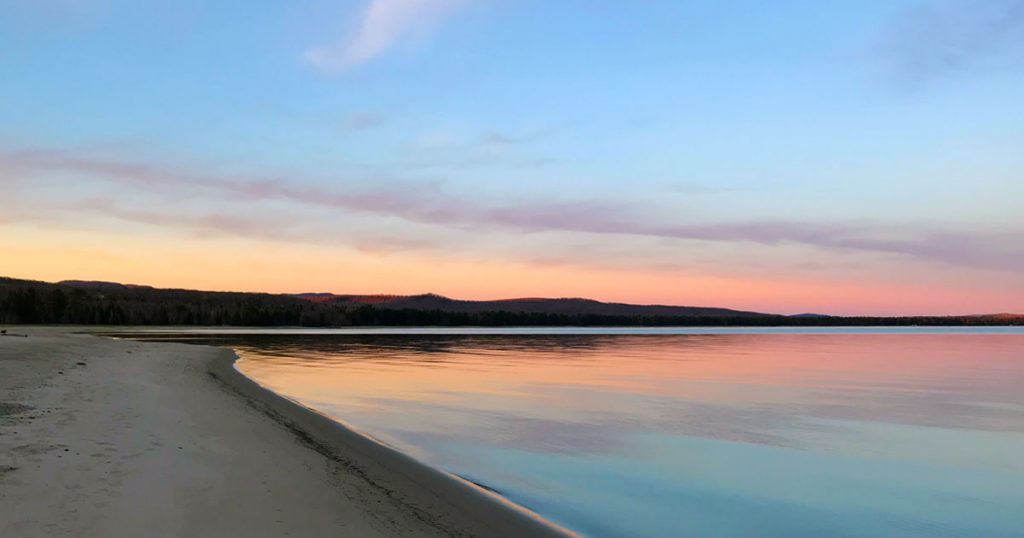 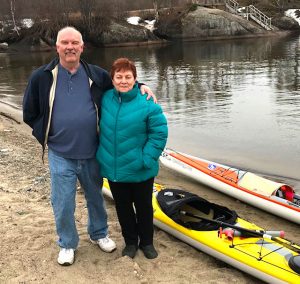 We left Grand Marais and picked up Ramona Asher and Brent Elling, our drop-off crew. It was a pretty drive with great company.

We arrived in Marathon, right where we left off in September. We stayed at the Marathon Harbor Inn just like last time and had a very nice meal at the same restaurant/bar. 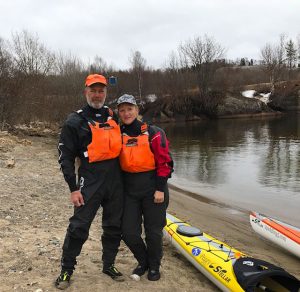 Up early and, after a light breakfast, we were off. The boats got packed up, we remembered just where everything went. Hugs all around and we were on the water.

The lake was gentle with us. We made a few small harbor crossings, paddled past a few chunks of ice, and 22 miles later we made our first landing and camp of 2018 on a small bit of land with a stream on one end.

We were so cold it was difficult to get our hands working to set up camp. We landed at 3:00 and by 4:30 we were in the tent, snuggled in our bags and napped till 7. When we surfaced from our nap the clouds were gone, the sky was clear and the tent had warmed. We made our meal, investigated our new surroundings and were excited to find moose tracks! It was a great first day back.

It was a cold, miserable night and without Joe I’m sure I’d have frozen solid. We stayed in the tent till 9:30 just to let it warm up enough that we could function.

The lake was slightly rough but doable, if you don’t consider hands that don’t work. After 9 miles we stoped to rest and the wind picked up, no big surprise. The lake turned into a mass of whitecaps and we said we were done for the day and set up camp.

The island is so pretty with its white sand and green water, too bad it so darn cold. 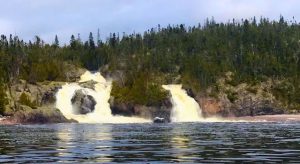 The lake was a bit rough and confused. We had high hopes for the weather because it seemed so nice and warming when we left, but then things got rough and it clouded over and rained on us. Once again our hands were frozen. 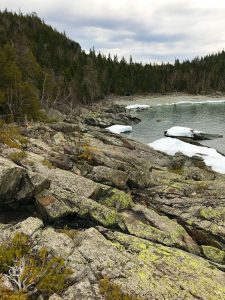 We stopped for a rest on Otter Island and after that things looked up. We paddled past a gorgeous waterfall, so loud and so powerful. At one pointe we wanted to stop but with the improved conditions we kept going and doubled our mileage.

Our day ended on a pretty pile of rocks, that’s all we could find. All set up with supper and a warm fire and we tucked in for the night. The waves were crashing only about 10 feet from the tent, they were 4 foot waves and so loud.

The waves calmed by morning but a great batch of white caps were growing. Without GPS, marine radio, or cell phones to check SailFlow, we decided the smartest choice was to stay put. We do have maps for backup but felt it was best to not paddle.

We actually saw signs of life-a commercial fishing boat. Had a bit of rough water so stopped for lunch and by time we pulled out again things had calmed down.

We found a camping spot on a perfect beach with a river coming out one end; it even had marked hiking trails. It felt like spring today and we were warm enough to have the tent flaps open, it was a real treat. 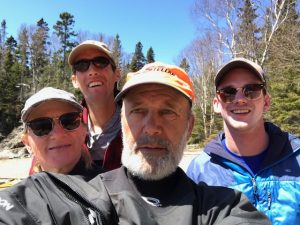 The spring day I told you about yesterday lasted about as long as it took me to write about it. It was a very cold night.

We headed out about 9:00 and met up with two other paddlers, Connor and Jake, who are guides out of Wawa. Connor had so much great information about the lake and where to camp. We paddled with them a few miles then had our break with them.

We left and paddled to another amazing spot about 4 miles from Wawa. We added 30 miles!

Another cold and uncomfortable night but the pretty spot made up for it.

We were on the water by 9:00 and planned a crossing but the lake kicked up and we changed directions so we followed the shore to Wawa. We got a reminder of how the lake can change fast and make you think. Waves by the lighthouse were definitely a challenge, but we kept going and made it through.

Had a short stop and were off again, but waves got bad and we headed to a campsite at 9 miles.

We had phone service and were able to let family know we were ok. 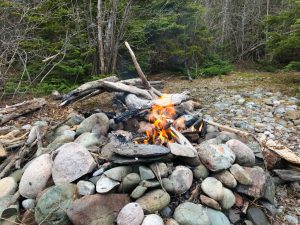 It was sprinkling as we packed up but it didn’t last. We had a 28 1/2 mile day and all but 7 miles of that was perfect.

We had lunch on a sandy/gravely beach with more hiking trails and a couple campsites. We continued on our way, cutting islands. One spot could have been bad with huge rocks close to the surface, we almost got stuck…gotta pay attention. We had no sun, just rain and clouds.

We found another campsite…someone forgot a bottle of Crown Royal, too funny! We also found lots of large chunks of sea glass on the shore here.

The forecast for today was 20 degrees with 50 mph gusts and we got it. We stayed on shore and watched the lake go from whitecaps to walls of standing waves to 6 foot crushers. Pretty and powerful.

A great 30 mile day! We were able to make longer crossings with nice water and cut a lot of shore miles.

The landscape looks like an old western, felt like we were in Montana or Wyoming. Gorgeous! We are sorta out of the wilderness, paddling beside roads. It strange to see cars and trucks.

We are also seeing more houses along the shore. Campsites are not as easy to find when you have to consider intruding on someone’s privacy. We did find a spot that was nice and had a good evening. 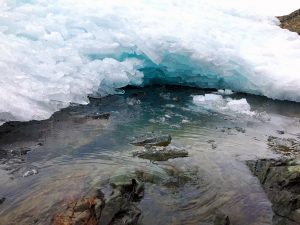 It was so cold last night, the worst frost yet and the boats had water frozen in them. Joe’s rudder was frozen and it took a while to get moving.

We paddled into more chunks of ice and even skim ice on the lake that was about 1/8″ or more thick. The sound made paddling through that is not so pleasant, and when it’s also not fun when it grabs at your paddle. After we got away from that we had a great paddle on calm water.

We ended our day with a total of 23 miles in and found another nice beach with a park. It’s not open yet but we had a nice walk around. We have a picnic table and I feel so fancy!

Click Here for more pictures from this part of the journey!