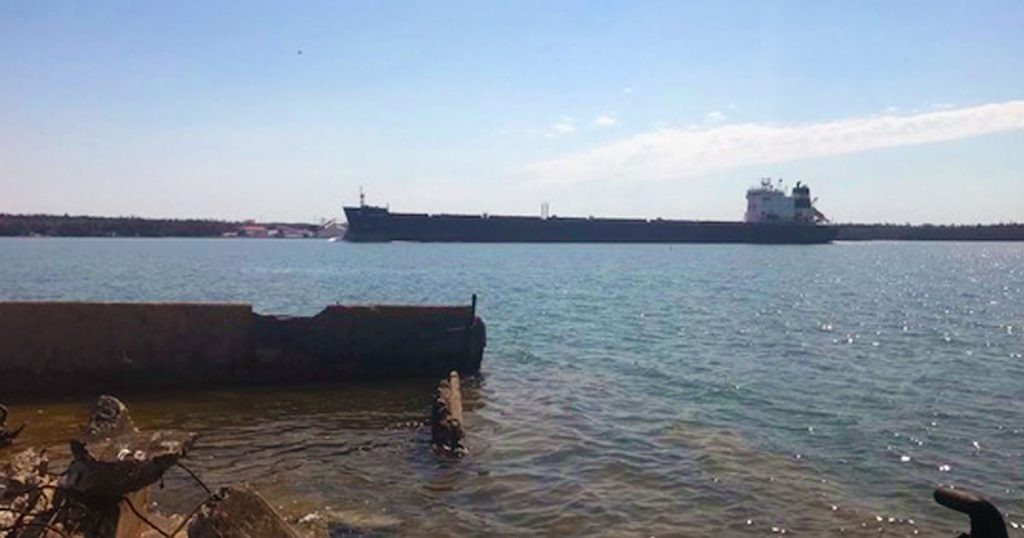 We finally had a warm comfortable night, and when we woke up the sun was bright and the sand was warm. We set out for a 13 mile crossing, headed for Sault Ste Marie.

The lake was very calm but much to our surprise we ran into night ice, we had to crunch our way through for about 5 1/2 miles. We saw white on the shore and figured it was more snow, what’s new? But, it wasn’t snow, it was pack ice! We couldn’t go farther. We were stopped dead in the water about 30 miles from Sault Ste Marie. We picked our way for about 100 yards and pulled our boats up on shore. There was no way to go around it because if the wind were to switch we could end up in Whitefish Bay or out in the middle of the lake.

We started walking and 3 doors down we found our latest Water Angels, Marc and Yvette. They ended up inviting us to spend the night with them and gave us a wonderful lasagna dinner. We had a great visit; we talked and laughed until midnight. We contacted a guide we met earlier in the week and he agreed to pick us up the next morning and deliver us to the marina in Sault Ste. Marie.
13 miles 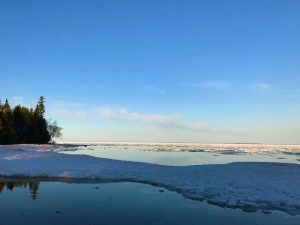 Conor arrived about 7:30 and we headed out. He is a guide but also a writer for canoekayak.com. We did an interview with him and should have a story.

We loaded our gear and paddled out onto the St Marys River, taking the same route from last summer, just in reverse. We stopped and camped in Dunbar Park just like last summer. It was a great day! We are seeing more freighter traffic.
14 miles

We were up early and on our way. The water was good and it was nice and warm out. We made our way through the cut and, with the current in our favor, we were much faster than on the way up. Our lake crossing was also easier than last summer.

We landed at Raber Bay and camped in the same spot. We headed to Raber Bar and Restaurant, the food was delicious.
21 miles 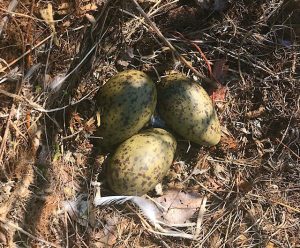 We had a nice warm night and didn’t need an alarm to wake us up. The birds and frogs took care of it…it was great!

We made our way to the mouth of the river and had to pull off and wait for a freighter to come in. We found hull nests while waiting and I was shocked at how big the eggs were.

We got back out and paddled onto Lake Huron-we are on the home stretch! The lake is also very shallow on this side; it’s crazy how shallow it is. We paddled to the back side of Drummond Island and set up camp in a marshy area.
31 miles

We were comfortable this morning and could hear the wind so we stayed in bed a bit longer.

Our cove was calm but our crossing was a job! We made 2 crossings and 9 miles, then took a short rest. The wind was in our faces and it makes paddling difficult. We  were so happy to hit a point and turn, but guess what…the wind was still in our faces! Joe finally decided we didn’t need to keep fighting, so we pulled off and set up camp. Two hours later the lake had calmed down-Go figure!

We can tell we are back on Huron: shallow water, big rocks and when the wind blows, the waves are big.

We walked the beach and found so many pudding stones, huge ones and we couldn’t take them-so sad. We also found a snake-not on our list of things we wanted to see.
14 1/2 miles 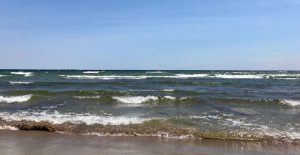 So much for getting up and off this island; the lake was wild and we decided it wasn’t worth it. The day was spent on shore, walking the beach, collecting rocks, and seeing more snakes. We even saw wolf tracks.

Up and out by 8; we paddled out in sprinkles. The lake was calm with big steady rollers and it was pleasant, but it turned into a steady rain. Our crossing was nice and we shared our space with a freighter-it was cool. It crossed in front of us then stopped and backed up to the quarry.

The shoreline here is marshy, with very shallow water and rocks that are huge, white and flat with holes in them. We paddled past a strange area; it looked like a shooting range but one table was several feet out in the water and the other was directly behind it…in the middle of nothing. The rain picked up a bit more and it was pretty cold.

Camping spots were few and far between but we found one and it turned out to be a spot with hiking trails again. We set up and warmed in the tent till the rain calmed down. When we went out we saw where a deer jumped over Joe’s boat; it was a big one judging by the tracks it left in the sand. We built a fire and were able to dry some of our gear.
10 miles

We started our day at 7:00 with wet gear; it isn’t fun to put on but it was warm enough that it really didn’t matter. We had a longer crossing and saw a boat, which is a rare sight at this point. Like so many others, the boats seem curious about us and head straight for us to get a look-it’s pretty intimidating because there is always a chance that they don’t see you. As they go by they smile and wave.

We took a break and had a nap on the lake, then headed out again. The wind picked up and we had our work cut out for us. With the water so shallow, any wind makes the waves bigger and fighting beam waves isn’t all that fun.

We met a second group on the water, a canoe and a kayak that didn’t seem to be having a lot of fun. They did however all have PFDs on today and it was nice to see that.

We made our way around the point and saw a sand beach, some sort of a park, so we called it for the day. The afternoon was nice and we were able to dry all of our gear, tent and bags from yesterday’s rain.
23 miles

It was a cool night with the wind coming off the lake, but as soon as we got up and moved into the sun it was nice and warm. The lake was perfectly calm and the sky was overcast which keeps us from overheating. We made several crossings that really ate up shoreline and moved us in the right direction.

When we stopped for our break we had to stop several yards from shore and walk our boats in-that’s how shallow the water is here. No matter how far off shore we were and at times it was a couple miles, we could almost always see the bottom of the lake. The rocks below look amazing, but if you watch them too long you get a little dizzy.

Late in the day we had a choice to make: we could pull into Providence and enjoy a real meal, or continue on. It was tempting, but the lake was perfectly calm so we paddled on…such a choice! We made 11 more miles.

It was hard to find a spot but eventually we did. It was a rocky approach, but the little sand beach was nice. We had deer tracks along with wolf and weasel.
31 miles

What a day! We had a nice warm night and it was warm out til the wind came off the lake-that was pretty cool.

We paddled out and headed for South Baymouth. Joe said we could stop for breakfast and eggs sounded really good to me. We paddled into the harbor and saw a ferry (Chi Cheemaun) approach at the same time. We decided to take it to the mainland, it would deliver us to Tobermory. With the SailFlow forecast we decided it was a good call. We had several very open water crossings, and this would save us from sitting on the shore watching the waves blow.

We got a room at the Blue Heron and played tourist. It was a fun little town to visit. We had a drink at the Tobermory Brewing Co. & Grill, then later we had dinner at the Crowsnest Pub & Restaurant. This is definitely a place to visit if you get the chance.
11 miles

Click Here for more pictures from this part of the journey!