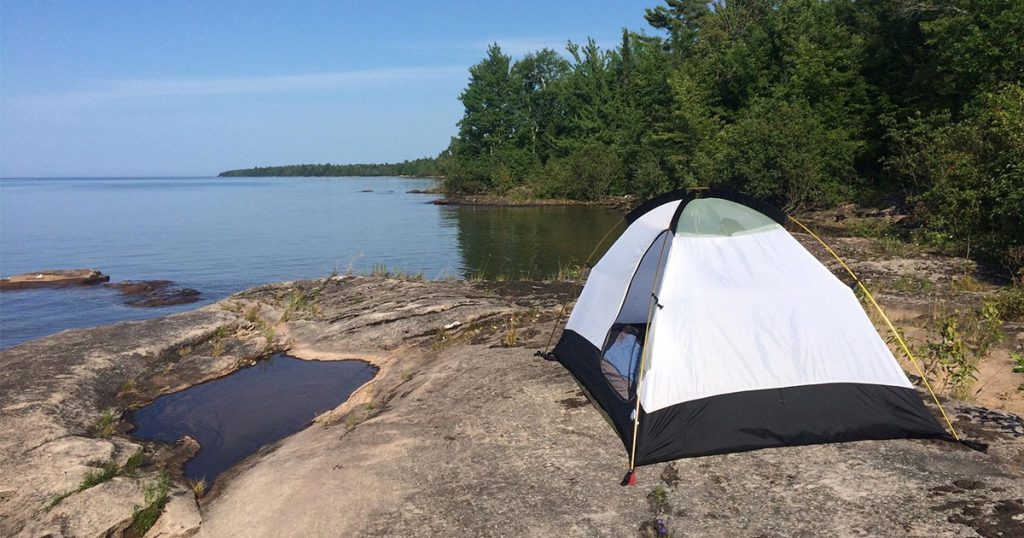 We started out for Paradise…
With a beautiful sunrise and high hopes for the days paddle. After the first 3 miles things headed south. We thought we could land in Paradise but instead we ended up with steep walls reinforced with rock to hold back the constant erosion caused by the waves. We had 9 miles of no fun but eventually we found a sand beach and were able to pull off. We waited for about 1 1/2 hours for things to calm down and we were back on the water. It wasn’t our day, things riled up again and we ended our day at Whitefish Point Harbor, it says no camping but we didn’t have a choice. Blown off twice in one day and we get the hint. We made 21 miles.

We had steady rain all night and a thunderstorm for a wake up call. The tent stayed dry, that was the good news. The waves were crashing over the break wall and its real pretty to watch from shore, not so nice to paddle in. We stayed on land and our friend Debbie Gelderblom stopped by, as usual she had tons of goodies and we enjoyed her company.

It rained all night again but morning was bright and sunny and we were off. When we hit the point we realized that although the Bay was calm the lake was another story so we turned our boats around and headed back. We set our campsite up again and decided to play tourist. We visited the Whitefish Light Station, just a short walk from the Harbor. It’s very nice, they have gift shop with everything including fudge and coffee…who could ask for more! This is also the home of the Great Lakes Shipwreck Museum. Just $13.00 gets you in to all attractions but not the Lighthouse itself. The museum is worth the price, we spent a lot of time reading everything they had. The bell from the Edmond Fitzgerald is there with all the names of the crew, very touching. Another building has a 15 minute movie about the Edmond Fitzgerald, I was in tears from the moment it started with the song. If you visit and we hope you do, make sure to see the movie.

We were able to paddle, we had good water and a perfect day of paddling. We stopped for a rest and found a blueberry patch, I picked more than a pint and we had dessert after supper! We paddled on and reached our goal of Muskallonge Lake State Park. We had a long set of stairs from the lake to the campground but when we got our gear to the top one of the DNR park workers loaded it up and took it to our site. This campground is very well kept, the bathrooms are clean and the showers are hot! It also has a swim area and a fishing lake. Big recommendation for this one! We even got to have a fire, so nice.

We had a rainy night and warnings of thunderstorms forecast for the day so we stayed on shore again. It rained all morning then cleared and we were able to take a walk in the afternoon and catch up on journals and our Facebook page.

We had a bit of a haul down to the lake, it was too early to get DNR help this morning. Just 2 trips and we repacked and paddling out. We passed the Grand Marais MI Harbor and saw the Lighthouse but weren’t close enough for a photo, it’s pretty. Paddled past Grand Sable Dunes and did stop for a picture of Au Sable Light Station. I love seeing the Lighthouses. When we stopped by the Dunes for our snack it included a nap and we sure enjoyed it! We had hoped to make it to Beaver Creek but the lake went crazy and we ended up stopping a mile short, not so bad. The shores in this area have changed a bit, lots of small rocks again and tons of color, lots of purple and that’s new to us. We have a beautiful spot for the night and are close to Pictured Ricks for tomorrow. We gained 33 miles.

We wanted a perfect day for paddling Pictured Rocks and we got it. The walls are beautiful, intimidating even considering that if things get wild there is no place to pull off. With all the sheer walls and such a lot of green on top it made me think of the pictures I’ve seen from Ireland. Once we got closer to Munising we met several tour boats, pontoons and saw a group of kayakers heading out. We ended up in some choppy water but nothing to bothersome. About 3 miles out of town we stopped at a small beach, had lunch and picked blueberry’a again…who doesn’t love free fresh fruit! When we got into town we landed right in front of the Veterans Memorial and it’s very nice, very special to me. We were able to walk just a few blocks into town and buy a few things that we needed. Had lunch, real food that was not dehydrated and it was wonderful. The place was called the Dog Patch Saloon, the service was good and the food was great! Stop in if you ever get there. Back to the park to repack the boats and as always, we met people interested it what we are all about. Questions about the boats and how do we fit everything we need in so little space. It’s always fun. One man stopped to talk and took us to the memorial to shown us the stone with his brothers name on it.

Later in the day we went back to town, had coffee and walked around a bit more and ended up having really good pizza and a beer at the Irish bar called Corktown. We had a good visit and even gained more money for our cause. We made 21 miles today.